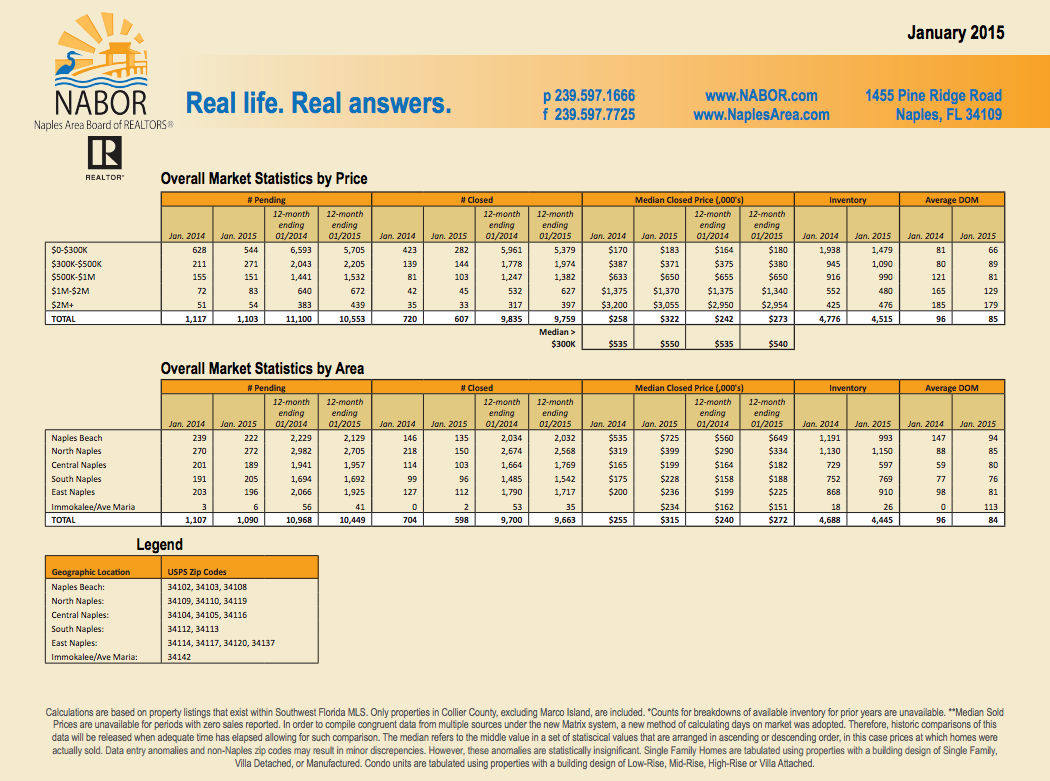 
"We're not seeing as dramatic a decrease in inventory this January as in last January," said Mike Hughes, NABOR® president and Vice President/General Manager of Downing-Frye Realty. Inventory decreased only 5 percent from January 2014 over January 2015, compared to a decrease in inventory of 15 percent from January 2013 over January 2014. Hughes believes this slowing of inventory decline may be a good sign and remarked that "we should expect another tremendous season for home sales."

As typically seen during the first three months of the year, cash sales are also on the rise. In January, the 394 cash sales reported accounted for 70 percent of home sales transactions in the Naples area. The report also showed sales of foreclosed homes in January were at their lowest - 64 - since NABOR® began reporting home sales activity in July 2009 when foreclosures numbered 240.


If you need to find out about a Naples real estate agent you can contact the Naples Area Board Of Realtors for more information.

As pointed out by several broker analysts during NABOR®'s 2014 annual media conference on January 16th, buyers looking for single family homes in 2015 will be pleased. In fact, according to Cindy Carroll, SRA, with the real estate appraisal and consultancy firm of Carroll & Carroll, Inc., affordable single-family homes are not appreciating out of control, as often speculated. "The median closed price for single-family homes in the $300,000 and below category increased 16 percent from January 2013 to January 2014. Yet the January report showed an increase of only 8 percent from $178,000 in January 2014 to $193,000 in January 2015."

"The key is to work with a REALTOR® that knows the Naples market," said Pat Pitocchi, NABOR® media relations chairperson and corporate trainer at Downing-Frye Realty. "Regardless of whether you are in the market to purchase a starter home or a seasonal residence, a REALTOR® can simplify the process and help you find exactly what you want."

The NABOR® January 2015 Market Report provides comparisons of single-family home and condominium sales (via the Southwest Florida MLS), price ranges, and geographic segmentation and includes an overall market summary. The NABOR® January 2015 sales statistics are presented in chart format, including these overall (single-family and condominium) findings:

The greater Naples area housing market has had dramatic changes in inventory, price, availability and demand over the past year; more so in some neighborhoods than in others. It is because of those changes and the increasingly complex documentation involved in buying and selling homes that buyers and sellers are working closely with a REALTOR®. When you work with a REALTOR® who understands the diverse tapestry of the Naples area real estate market, you are partnering with a professional who has the experience you need to buy or sell with confidence in either the new home or resale markets. 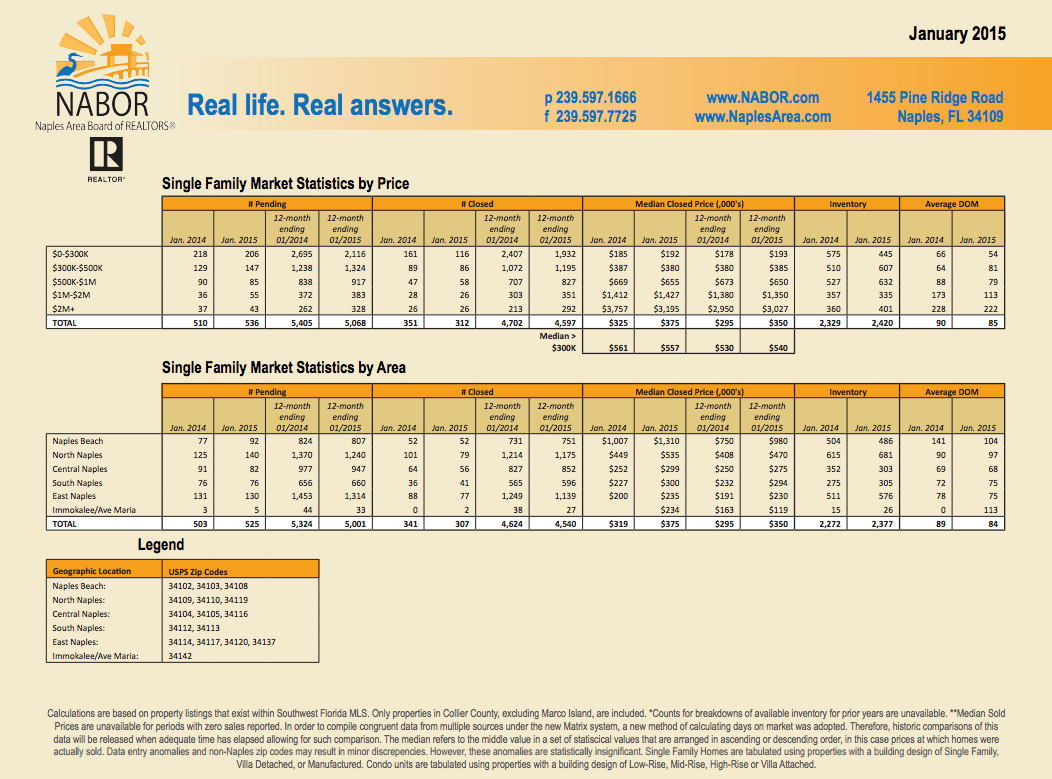 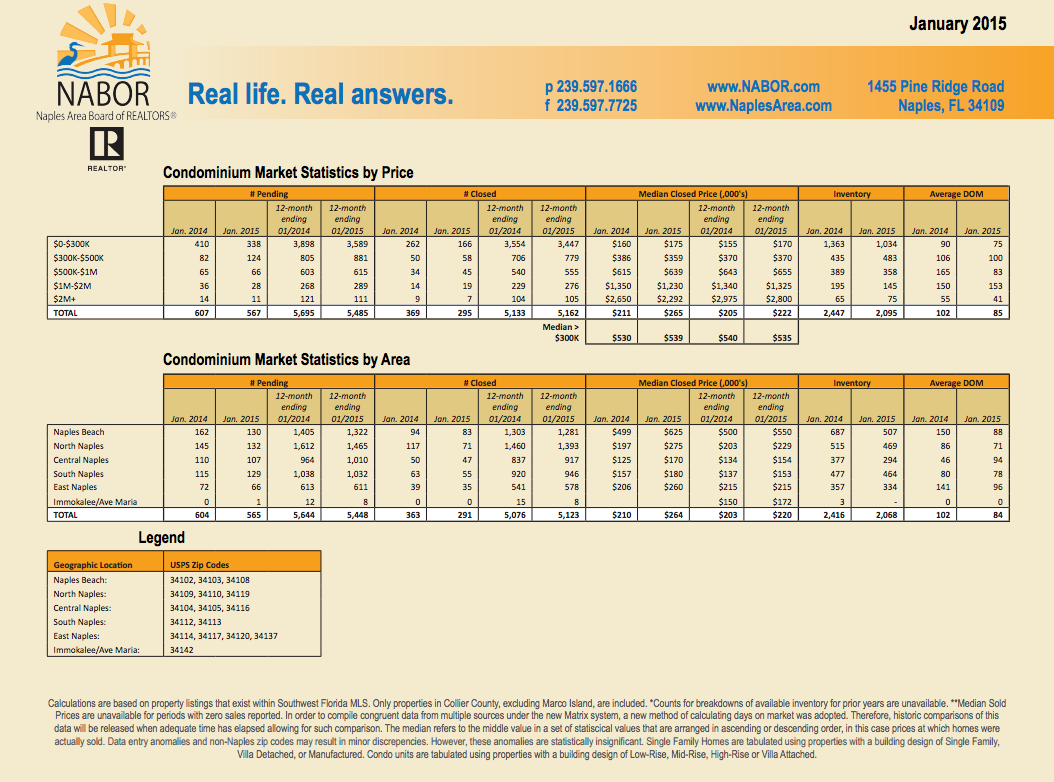 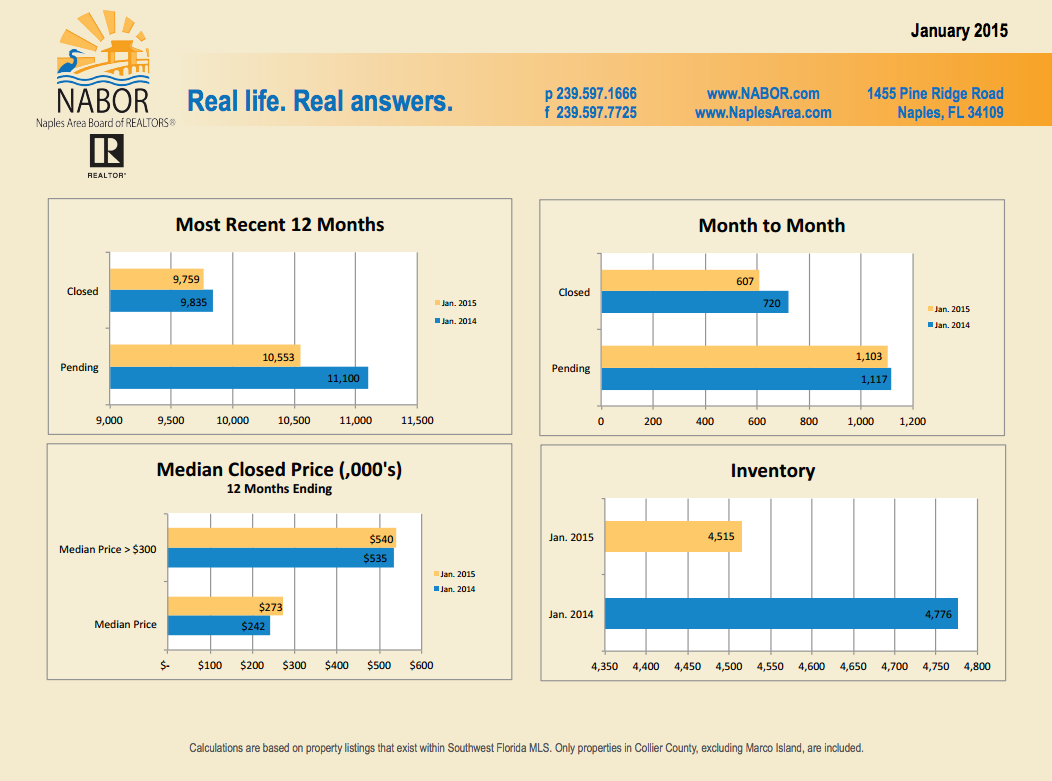