A service from the Naples Area Board of REALTORS®

Naples, Fla. (March 20, 2015) - An increase in the number of home sales in the over $300,000 price categories, overall rising median closed prices, and an increase in inventory in most price segments were just some of the trends included in NABOR's February 2015 Market Report released by the Naples Area Board of REALTORS® (NABOR®), which tracks home listings and sales within Collier County (excluding Marco Island). But the best news? These trends are expected to continue.
"We saw year-over-year growth in our overall median closed prices throughout 2014; and with February getting off to a similar start, we expect that trend will continue," Vice President and General Manager of Downing-Frye Realty and NABOR®'s 2015 President Mike Hughes said. "Our inventory remains low yet we ended February with 1,280 sales pending. This indicates a healthy market." According to Kathy Zorn, broker/owner of Florida Home Realty, "February's activity revealed that sellers may not be sitting on the fence anymore. It's been 10 years of recovery and many homeowners who've weathered it may be at a place where they feel satisfied their property's value has recovered."
While overall closed sales activity for single-family homes remained even in February 2015 compared to a year ago, its inventory grew by 6 percent from 2,305 homes in February 2014 to 2,449 homes in February 2015. "I don't think the increase in inventory is necessarily all due to bracket creep," said Zorn. "Homeowners keep an eye on their property values. When they presume their home has rebuilt equity, many will contact a REALTOR® to confirm the increase in value. If the equity is confirmed, they're likely to put their home on the market."


If you need to find out about a Naples real estate agent you can contact the Naples Area Board Of Realtors for more information. "Condos are not recovering as well as single-family homes because they are at the whim of certain financing obstacles," said Cindy Carroll, SRA, with the real estate appraisal and consultancy firm Carroll & Carroll, Inc. "Getting a bank to approve a loan on a condo is more difficult because they typically rely on extenuating factors such as the financial health of the homeowners' association, the age and structural state of the building, and a requirement to receive Fannie Mae approval." 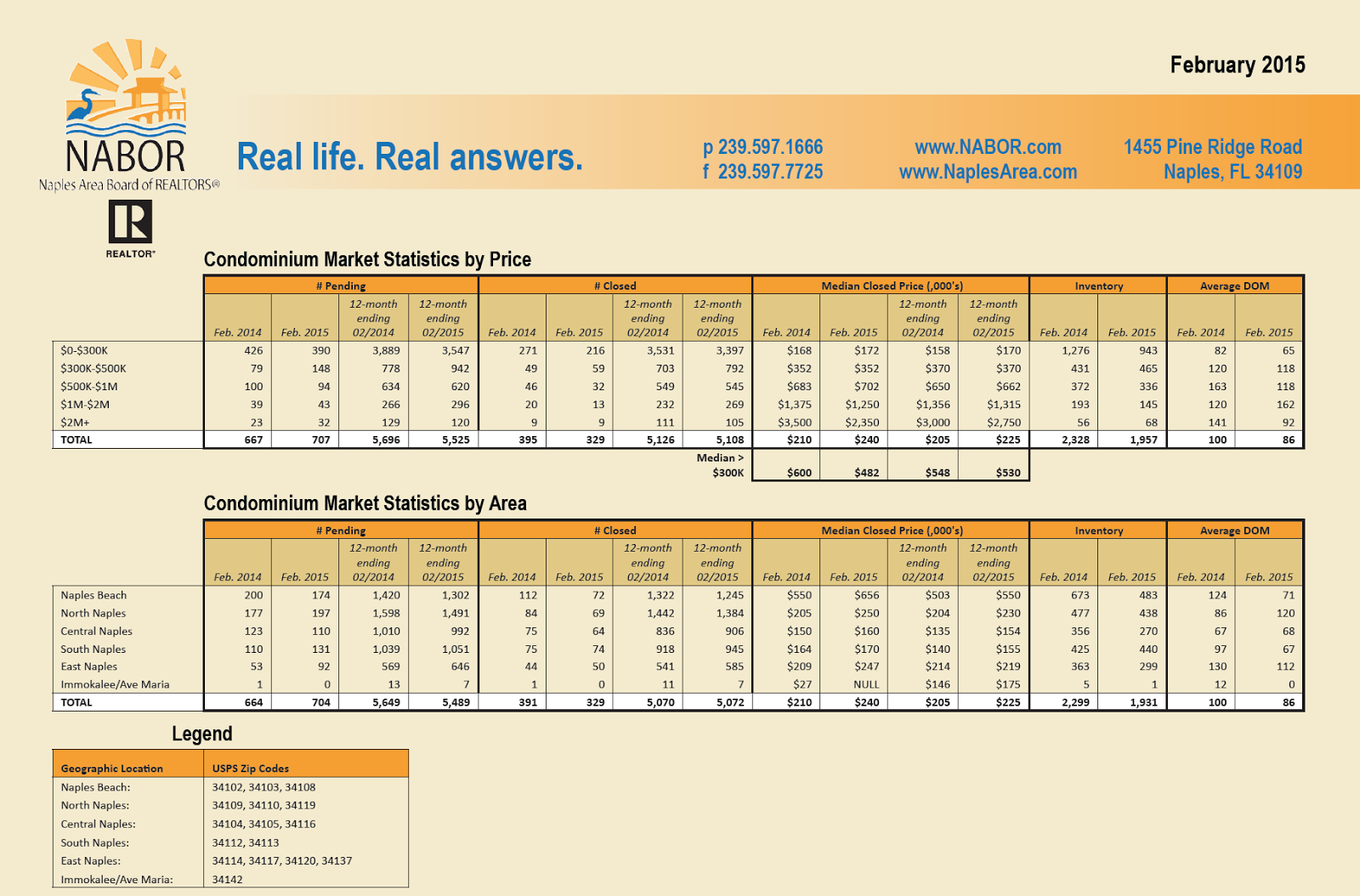 Despite these obstacles, broker analysts think the condominium market's activity in the last year is an indication of its potential for an increase in value. For example, pending sales for condominiums in the $300,000 - $500,000 price category increased 87 percent from 79 units in February 2014 to 148 units in February 2015 and overall, the median closed price jumped 14 percent during that time period. "We've seen a recovery and stellar activity in the single-family home market. It wouldn't surprise me if condominiums became the new exchange," said Carroll. "And may experience the same type of recovery as the single family home market."

The NABOR® February 2015 Market Report provides comparisons of single-family home and condominium sales (via the Southwest Florida MLS), price ranges, and geographic segmentation and includes an overall market summary. The NABOR® February 2015 sales statistics are presented in chart format, including these overall (single-family and condominium) findings:

There are 3,027 homes for sale in the Naples area that are priced above $300,000. This comprises about 66 percent of the market. If you are a homeowner that sat steady while the market recovered, find out whether your home has gained equity by contacting a REALTOR®. A REALTOR® has the experience and knowledge to do provide an accurate market comparison that will help you determine whether now is the right time to sell your home and ensure your next sale or purchase in the Naples area is a success. Contact a REALTOR® on NaplesArea.com®. 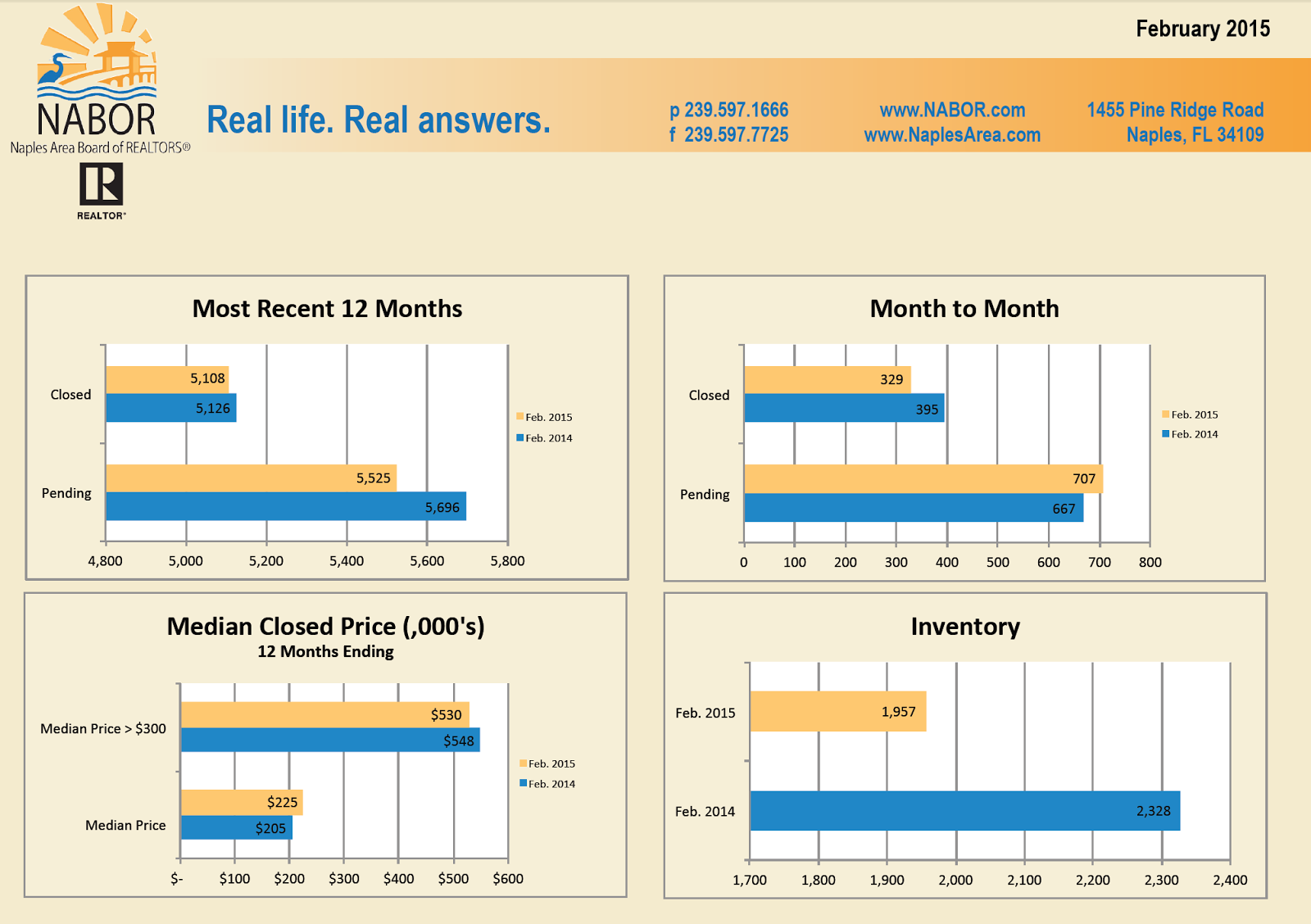 The Naples Area Board of REALTORS® (NABOR®) is an established organization (Chartered in 1949) whose members have a positive and progressive impact on the Naples Community. NABOR® is a local board of REALTORS® and real estate professionals with a legacy of nearly 60 years serving 5,000 plus members. NABOR® is a member of the Florida Realtors and the National Association of REALTORS®, which is the largest association in the United States with more than 1.3 million members and over 1,400 local board of REALTORS® nationwide. NABOR® is structured to provide programs and services to its membership through various committees and the NABOR® Board of Directors, all of whose members are non-paid volunteers.
The term REALTOR® is a registered collective membership mark which identifies a real estate professional who is a member of the National Association of REALTORS® and who subscribe to its strict Code of Ethics.